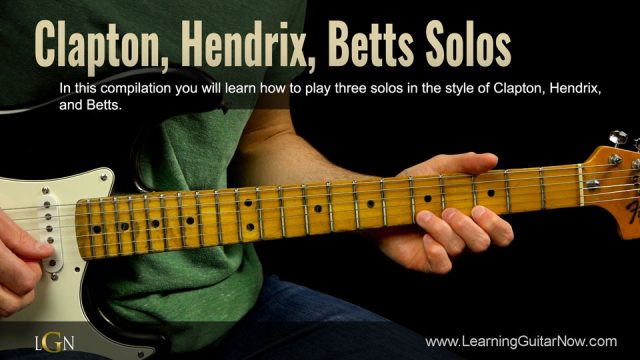 Learn how to play 3 blues rock solos in the style of Dickey Betts, Jimi Hendrix, and Eric Clapton in this video course. Running time is 2 hours.

I’ll never forget the first time I heard each one of these guys play.  It was like a light bulb being turned on, and now I could really see what I wanted to learn on the guitar.  Through many years of trial and error I believe I’ve learned a few things about these guys playing style, and in this compilation I want you to show you the coolest parts of these solo styles I’ve put together.

In this compilation you will learn how to play three blues rock solos in the style of these legendary blues rock players as well as some must know tricks to sounding like these legendary influential blues guitarists.  Start today and let me show you what I have learned by studying these guitarists styles for the past 20+ years.

Solo Styles You Will Learn

* Note – These are not note for note copies of these solos but my own creation of their “Greatest Licks”so to speak.