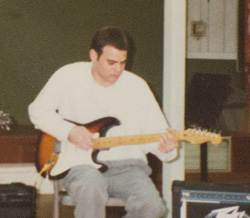 It was the summer of 1992 and I had just graduated from High School.  I had been playing guitar for about a year now and finally felt like I was getting somewhere.  I was currently taking private lessons at M & S Music in Mobile Alabama from a guitar instructor named Mark Habib.  He was a great teacher and was mostly focused on classical guitar but he could definitely play some electric as well.

During this summer, Mark had asked me if I wanted to participate in a Guitar Recital he was putting on.  I was a little scared and intimidated at first, but I thought, sure this would be no problem.  I immediately decided that I would play the master piece that is “Stairway to Heaven” and rock it out!  Without the solo of course, I could only really play chords at this time and I would be playing an acoustic guitar.

I remember practicing quite a bit for this recital and put together my own little arrangement of the classic Zeppelin tune.  I thought I was really going to do well, but of course I was pretty nervous!  The day finally came when I would play the recital and I had been at the beach for a couple of days before this and was now driving back to Mobile to go straight to the recital.

I arrived at the recital a little late but when I walked in, I almost turned and walked directly back out the door.  I looked around and noticed that everyone was dressed up in nice shirts and nice pants and most of these kids were holding classical guitars.  I happened to be wearing cut off olive khaki shorts, flip flops, and a faded Doors t-shirt with a big picture of Jim Morrison on the front with a baseball cap on backwards!  I was a little uncomfortable in this attire to say the least!

I just started saying to myself that it’s ok, you’re still going to play well and that’s all that matters.  I had only been playing for about a year at this point and thought I was pretty good, but I hadn’t really been around many guitar players that could really play, until now.

I did get up there and stumble through it though.  I was very nervous and messed up quite a bit.  I ended the song with my arrangement by playing the really rocking part at the end with the barre chords.

My hand was shaking badly and the barre chords seemed very difficult to play at this time.  After I finally finished the song, everyone clapped but I didn’t really feel that great about my performance or the whole experience.

I quickly rushed out of the place and proceeded to drive home.

On that drive home I felt a sense of failure.

I knew that I had only been playing for a year, but man those guys were really good.

Could I ever become that good?

At that point in time I thought that I probably never would.  I did later realize that I needed a lot more practice and much more time, but I did give it a shot and put myself out there for people to see and hear regardless of the outcome.

I’m telling you this story because when you’re learning guitar there will come many points in time when you feel like you will never get where you want to be.  It could be a new style, slide guitar or whatever, but in these moments it is when you must make a commitment to keep on going and keep putting yourself out there again and again.

This will determine how far you will go.

Anyone can keep going when things are easy, but to truly arrive where you want to be, persevering through the difficult times will give you the tools you need to become the player you’ve always dreamed of being.

Stepping out and doing a recital, playing at a jam, making some YouTube recordings and getting yourself out there regardless of the outcome will give you the confidence that is needed for you to become the best player that you can be.

About 4 years after I played at that recital, I put on my own Guitar Recital as a teacher for my own students at Jubilee Music in Fairhope, Al. Here are some pictures from it below. 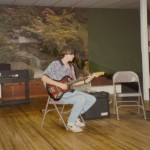 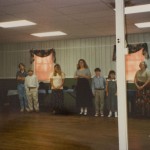 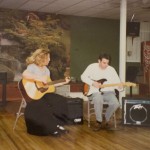 When was the last time you put yourself out there for the world to see?