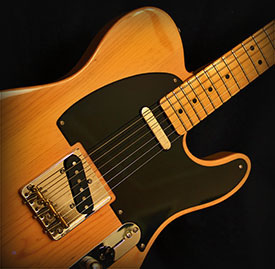 Here’s my Squier Classic Vibe Telecaster review. These are my honest opinions of this guitar and hopefully it will give you a better idea of whether this guitar will work for you or not.

There are so many telecasters out there now that it’s kind of overwhelming. There are some really expensive ones as well. I first looked at the Hot Rod 52 by Fender and it seemed to be a great choice. The only problem was that I didn’t have $1700 to throw down on a guitar at the moment.

So I began searching on the internet and kept seeing the Squier Classic Vibe Tele’s coming up as an excellent choice for an inexpensive telecaster. I paid $349 with shipping for this guitar. This is a little easier to come by than the $1700 for the Hot Rod Tele. I’m sure the Hot Rod is an amazing guitar, and I’m not knocking it. I just don’t have that much cash to fork over for a guitar at the moment. I’m sure many people are in the same boat.

So I received the guitar, and I have to say that it is a beauty to look at. It also plays very nicely. I did have to tweak the action and truss rod to my liking, but it sounds really good! The neck is a little different than I’m used to, but it plays great once I became more accustomed to it. It also has a nice chimey sound to it. That infamous tele sound that everyone knows and loves. Maybe I need to raise the pickups on it, but when I turn the guitar volume down, it simply loses the tone in my opinion. This is something I’ll have to look into further.

I then proceeded to put a set of .011 GHS Boomers on it and tuned it to Open G. Now to me, this is where the guitar really shines. I’m not saying it doesn’t play good in standard tuning, it does. I do, however like my Gibson ES 335 neck better. Although the Gibson 335 can’t get the same tone as the tell and sometimes I would like to have that. I can, however see myself doing a gig in standard tuning with the Classic Vibe, and it being just fine for me. It is a really nice guitar, and for the price it just can’t be beat. I have also played the Classic Vibe Strats as well, and while they are pretty good, they just don’t hold up to the Classic Vibe Telecaster.

Anyway, when I tuned this guitar to Open G Tuning and started playing slide, I was immediately blown away. I had finally achieved the Crossroads tone I had been looking for. It’s big, chimey, and distorts well with my Fednder Vibrolux. I do have to turn it up loud to get the overdrive through the amp though. This is where the Weber Attenuator comes in handy. Adding an OCD to the chain produced some great results as well as the Wave Cannon. Add some vibrato, and you have the tone similar to “Feelin’ Bad Blues” from the movie Crossroads done by Ry Cooder.

You can check out this guitar at Amazon here. Fender Classic Vibe 50’s Telecaster

This is a very good guitar for the price point and I still use it a lot many years after I purchased it without modifying anything. You can check out this guitar on Amazon. Squier Classic Vibe Tele