For some time now my 1966 Fender Vibrolux has been developing what is called “Cone Cry”. It’s more pronounced when using humbucker guitars, and after experiencing it a lot more lately, I decided to set out on a search to find a decent replacement speaker.

First, I wanted to figure out what speakers I had in this amp to begin with. Since this is a very old amp, the speakers in it were very old as well. When I got the amp back in 2009 the speakers were not the original ones but looked very old.

To figure out what kind of speakers I that were in the amp ( since there were no signs of what they were other than some sort of Celestion ), I posted a few pictures of the speakers on a few gear forums and then someone finally told me to email Dr. Decibel. Cue Austin Powers mystery music now. :)

For some reason, every time I hear the name Dr Decibel I think of a character out of the Austin Powers movies. :)

Anyway, back to the real matter at hand.

I emailed the Doc and he gave me the exact info I needed about this Celestion speaker. This was his response:

T2770 is a G10M first issued in October 1977. The manufacturing datecode on yours is LK25 suggesting it was made on the 25th November, 1977 so a very early one. It’s a 25W speaker like the G12M (Greenback) and uses the same 35oz ceramic magnet. It’s quite a big magnet for a 10” and I’d expect sensitivity to be high at around 98/99dB but with a very detailed, middly sound rather than warm and plumy. I guess closest current model is the G10 Vintage.

So now that I knew what I had in the amp I did some research and came up with a few speakers that might work well with this amp. I also remembered that I still had my Weber 10F150T from the Princeton I once had. I also had an Eminence Copperhead in my Pro Junior to try out as well. This gave me a few alternatives to see how different these speakers sounded in the amp.

I then decided to purchase 2 Eminence Legend 1058 speakers to try out. In retrospect I probably should have got One Rajin Cajun and One Legend but oh well.

So here are the Contestants in the Fender 1966 Vibrolux Speaker Shootout. 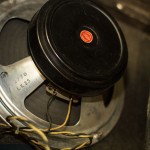 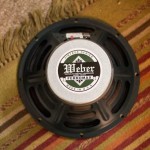 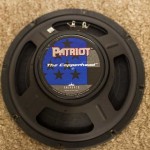 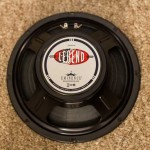 All the settings on the amp were exactly the same for each speaker and there was no EQ or Compression applied to each clip. Each clip was recorded into Presonus Studio One using a single AEA R84 about one foot from the amp.

Here are the speaker combinations used while recording.

1977 Celestions loaded in both speakers with the mic on the right speaker.

Eminence Copperhead loaded in the left speaker with the right speaker housing the Weber 10F150T.  Mic was on the Copperhead speaker of course.

Eminence Legend 1058 loaded in both speakers with the mic on the right speaker.

After trying multiple guitars with 2 Eminence Legends in the amp, I think I’m going to stay with this combo as it seems to be the most versatile for all my guitars. Overall, the Weber sounds really good but seems to have too much high end that I don’t like. Not sure why, but I like it in the Princeton.

I love teaching the blues and have created numerous training courses to learn how to play like BB King, Clapton, Duane Allman, and more. Get Started Now