Which is More Important for Tone? The Guitar or Amp 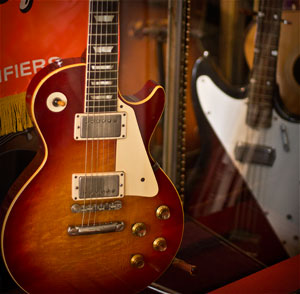 Lets be honest, a wet fart would sound good through that amp, let alone﻿ any guitar!! 😉

Well, that’s a pretty harsh statement, but it does bring up the question of what should you spend your hard earned money on. A better guitar, or a better amp?

This is a very difficult question and there’s not really a definitive answer. The only thing I want to do is show you a couple of different viewpoints, and then you can determine how you would like to spend your money. It could also be said that your money would be better spent on learning how to play, and this would ultimately give you a better tone. This is very true, but let’s assume you already know how to play at a decent level, and want to get a nice tone coming from your rig.

I will say that no matter how good you play, a cheap guitar and a cheap amp, just doesn’t compare to a nice guitar and amp setup. While the very cheap rig will produce sound, it won’t inspire you to play like nice gear will.

So let’s take the amp. If you own something like a Peavey Bandit, then you will know that there are limitations with this amp. It’s not tube, so you won’t get any breakup when the amp is cranked. The clean channel can be quite harsh if you don’t set it right, and the distortion channel is very unpleasing to me. Having said that, you can make it sound ok and I’ve used them for private lessons many times.

I have put my Gibson 61 Reissue SG through this amp and while it is a pretty good tone, the sound of my guitar through my 66′ Fender Vibrolux is a dramatic change in sound for the better! It’s unbelievable how much difference there is!

Now lets take the Peavey Bandit and use a cheap Squier Strat. While this sound is not amazing, it sounds pretty good and will get the job done. Plugging this guitar into a nice amp such as a 59′ reissue Bassman will lead to a dramatic change in sound. This cheap guitar will now sound really good, but not near as good as my 79′ Fender Strat will.

One of the biggest caveats of the cheaper guitars is playability and inspiration. The feel of the guitar neck on the Squier Strat is just not easy to get around on. It’s not difficult, but it doesn’t inspire me to play. I feel like this is one of the biggest factors with cheaper guitars in general. One of the biggest questions this raises is, Does your guitar inspire you to play?
If it does, then who cares how cheap the guitar is. My Classic Vibe Tele was $299 and it really inspires me to play in a different way than all of my other guitars do. This creates the idea that, Tone and Inspiration created by the amp or guitar are correlated.

This leads me to the conclusion that if a guitar inspires you to play, you will probably play better on it, thus producing a better tone. This is a key concept to keep in mind. While the Squier Strat does sound decent, it never inspired me to play. It gets the job done, but that’s all. I think we should always be looking for guitars that not only sound good but inspire us to play. I’ve played some very expensive guitars that didn’t inspire me to play.

At this point I think it can be said that what we should look for, are pieces of gear that can bring us a decent tone, and also inspire us to play. If these two things can happen, then that guitar or amp can become part of our arsenal.

So this brings us back to the original question of which is more important for tone, the guitar or the amp? Well lets just say this, to me the amp has more control over the tone of your playing, and it also will give you inspiration to play new things. The guitar, however, since it is the instrument your hands are directly coming into contact with, gives you more inspiration by playing it, which will directly affect your tone in a big way.

I will come to the conclusion that you should purchase the best amp you can afford, then go try out tons of different guitars to find out which instrument speaks to you and will allow your inspiration to flow through it.

The cheapest amp that I recommend is the Deluxe Reverb. It’s really amazing and versatile. There are a number of cheaper amps that sound really good, but this blog is not about beginner guitar playing. This is my recommendation of what I think is the entry level of an amazing amp. This is only my opinion.

The cheapest guitar I recommend of course is the Classic Vibe Telecaster.

I’m sure many of you will disagree, that’s where you leave your comments below. Thanks for reading!

16 thoughts on “Which is More Important for Tone? The Guitar or Amp”